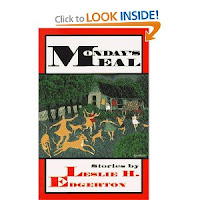 Who makes the best beer in the world? Maybe the Czech or Belgians. Definitely not the Danes. Or the  Americans.
But when it comes to short stories, well, the American’s rule the roost, they really do. Flannery O’ Connor, Raymond Carver, Stephen King, Dorothy Parker, Charles Bukowski, Richard Ford,  Kyle Minor. Loads and loads more.
And you can add Les Edgerton to that list.
Monday’s Meal by Leslie H Edgerton was published in 1997 and contains twenty-one tales of dirt realism. Sharp slices of American life. They’re set in New Orleans and Texas. Sometimes in bars or behind bars. They’re about café owners, hairdressers, nightclub musicians, prisoners, ex-cons, drifters and drinkers.
Monday’s Meal opens and closes ‘Blue Skies’ and ‘Monday’s Meal,' tales of strained relationships. But the real meat is sandwiched between them. And Monday's Meal  is particularly  meaty.
Some favourites: ‘The Mockingbird Café’ is the story of a man in a low-rent bar trying to mind his own business; ‘Hard Times’ is bleak and scary and brilliantly written; ‘The Last Fan’ is a tragic look at a shattered marriage; ‘My Idea Of A Nice Thing’ is a touching and sad story of an alcoholic’s  crumbling life;’Telemarketing,’ is the story of a young couple just trying to get by; ‘I Shoulda Seen a Credit Arranger,’ is a Runyonesque crime story.
And there’s plenty more to enjoy in Monday’s Meal. Edgerton has a strong and sure grasp of the lives of people who are standing on the edge of a precipice.
And  Les Edgerton will soon have a new short- story collection published by the hip new kids on the block, Snubnose Press, which can't be bad!
Posted by Chris Rhatigan at 10:33 AM