At The Flash Fiction Offensive...

The good folks at The Flash Fiction Offensive have published my story, "Glug, Glug, Glug." It's about one liquor store owner's quest to make a living in a world of assholes. I had fun writing this one, as I am a sadist.
Posted by Chris Rhatigan at 8:09 PM No comments: 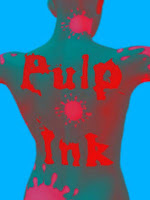 Okay, so you read this blog and, somehow, I still haven't convinced you to buy Pulp Ink.

Because I'm a shitty salesman.

Anyhow, now you don't have to bother with any of that "paying for it," as it is free at Amazon and Amazon UK. Until Saturday. Then you'll have to pay for it.
Posted by Chris Rhatigan at 5:34 PM No comments:

Writing funny is hard. There are plenty of good writers who sprinkle in humor here and there to good effect, but to actually write funny stories--like Woody Allen or Douglas Adams or PG Wodehouse or David Sedaris--is one tough feat.

But Jason Armstrong is up to the task.

Bad as Fuck, Armstrong's collection of short stories, is nothing short of hilarious. I first read Armstrong's work over at Thrillers, Killers n Chillers, which published "Man Changes Mind." In this story, a guy who seems like an undeclared college student considers becoming a serial killer because it seems like the easiest way to become famous. Then he considers how difficult being a serial killer actually is and eventually abandons his half-baked plan. This one cracked me up when I first read it and it's my favorite in the collection.

I also loved "Look Who's Fucking Talking." Ah, the joys of parenthood. Here's a two-year-old buttmunch who terrorizes his poor father in a surprisingly (and somehow appropriately...) mature manner. And Armstrong manages to somehow pull off a touching and genuine ending.

Much of the humor in here is in the absurdity of the premises, such as "Ass to Mouth," in which a frustrated clerk mugs a very emotional ATM. This works very well in "Rejected," too, as we hear one side of an email conversation between an editor and an increasingly insane writer.

This one's only 99 cents over at the Amazons so you better check it out.
Posted by Chris Rhatigan at 10:50 AM 4 comments:

Last year, Andrez Bergen leaped onto the scene with Tobacco-Stained Mountain Goat, with a cover and title that thoroughly convinced me of the book's appeal before I'd ever read a page.


This summer, his second book, One Hundred Years of Vicissitude, will be released, and I was lucky enough to get an early look.

In some ways, these are two very different books. TSMG is a sci-fi noir thriller set in post-apocalyptic Melbourne, while One Hundred Years is a more literary venture about one man's swim through purgatory with an obtuse, lovely Japanese guide.

Yet both books are smart, filled with dark (and light) humor, littered with cultural and media references both popular and obscure, and told from the perspective of cynical, sensitive, likable, alcohol-loving protagonists trying to navigate their way through confusing, morally questionable worlds. Both are told in the author's inimitable narrative style--Bergen relishes wacky tangents and dives head-first into philosophical dialogues that prove to be some of the most satisfying parts of his books.

Bottom line is that both of these are highly original, challenging yet thoroughly enjoyable novels. Bergen has a voice all his own and I'll be on the look out for wherever he pops up next. TSMG is published by Another Sky Press, a Portland organization that takes a very different (and welcome) approach to publishing. 100 Years is published by Perfect Edge Books.
Posted by Chris Rhatigan at 11:25 AM 4 comments:

Pablo and I have a yak

Part 3 of my dialog with Pablo D'Stair is up here. We discuss twists, whether or not predictability matters, and dissect/argue about a Paul Brazill story.

That Pablo is one tough cookie.
Posted by Chris Rhatigan at 5:28 PM 2 comments:

I'm honored to host Patti Abbott at All Due Respect with "Is That You?" It's a story about hard times and desperation filled with the unsettling menace that Abbott does so well.
Posted by Chris Rhatigan at 9:27 AM 3 comments: 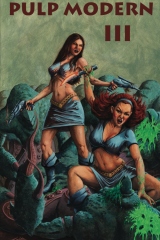 The new Pulp Modern is here and available at CreateSpace. The first two issues of this magazine lit the world on fire and I expect nothing less from this next one--Garnett Elliott, Amy Bloom, Matt Funk, Richard Godwin, Edward A. Grainger, William Dylan Powell and ever so much more.

It also includes my story, "You're Welcome." It's about a guy in line at a grocery store who develops an obsessive hatred for the guy in front of him.

And over at Yellow Mama I've got a story about a truck stop diner waitress called "Bright Girl." As in all good stories, a deformity is prominently featured.

One reviewer of Bury the Children in the Yard by Andersen Prunty, who gave the collection one star, said:


I got this book thinking it might be fun to read some horror stories in between classes. What I ended up getting was a selection of stories that did nothing more than make me go "Huh."


This must be one of those cases of one man's trash being another man's treasure. I loved this collection for precisely the same reason. Prunty never reveals the original source of the horror, never explains too much. He leaves it up to the reader to create their own interpretation.


And it's not the kind of horror that's intended to scare the reader, or at least not in the traditional sense. I would describe it more as unsettling or disturbing--the kind of quiet horror that James Everington has also mastered.


My favorite in here is "Music from the Slaughterhouse," in which average, small-town folks find a fountain of youth and beauty. Of course, this comes with a hefty price.


This is a very fine, unusual collection of stories that's free right now at Amazon.
Posted by Chris Rhatigan at 11:46 AM 5 comments:

Sometimes, you've just got to say, "fuck it."

That's what the folks who put together the Burning Bridges anthology did. When life (a small publishing house) gave them lemons (blatantly copied cover art), they made it into lemonade (a collection of kick-ass stories).

Each piece involves a character permanently ending something--a relationship, a job... a bridge. This theme spreads across many genres, sci-fi, crime, literary, and horror all make appearances.

Paul Brazill is as brilliant as ever with "The Beginning of the End." A pair of jilted, murderous lovers hole up in the same hotel in this topsy-turvy tale. Brazill weaves together multiple storylines deftly and ends it with a sharp payoff.

Julia Madeleine's "Unforgettable" details the suicidal tirade of a woman who was on the wrong end of one too many bad relationships. I saw the ironic ending before it happened, but that made it no less satisfying! A very tasty tale.

"A Freeway on Earth" by Heath Lowrance is an absurdist masterpiece. Our narrator is running late for work--again--and bracing himself for the inevitable thrashing his supervisor is all-too-willing to dish out. He blazes down the interstate, but gosh darn it, obstacles blockade him at every turn--a hideous car accident, a pregnant woman in a cab about to give birth, and, of course, an alien invasion. It's the kind of satire of modern life that Lowrance does so well.

Darren Sant's "Punishment/Lola" reminds us that it's never a good idea to fuck your boss' spouse. Especially when your boss is a criminal. Or does it? This is a fast-paced tale with some excellent dialog.

Plenty of other good stuff in here, including a revenge classic by Allan Leverone and a couple of degenerates sweating it out in McDroll's "No Turning Back." Highly recommended.

On an unrelated note, Pablo D'Stair and I have a conversation about genre and literary fiction over here. It's a four-part series being published by a Sri Lankan newspaper. Previously, Pablo had a very interesting dialog with author Caleb Ross. Next month he'll talk with Nigel Bird.
Posted by Chris Rhatigan at 10:11 AM No comments:

Daniel Mkiwa is at All Due Respect this issue with "The New Sleep," a story about loyalty and robbery gone wrong. Head over, check it out and, if the mood strikes you, leave a comment.
Posted by Chris Rhatigan at 6:48 AM 1 comment: