I haven’t done as much online short story reading this year, as I have done in the past. But there are some sites that always deliver. So, I thought I’d pick from those sites some stories from writers that were new to me in 2012 and made immediate impact. All of these stories are lean and mean and deliver short, sharp, shocks.

Rundown Dog by Gareth Spark at Near To the Knuckle.
Vivid, brutal.
http://www.close2thebone.co.uk/wp/?p=613

The Banyan Tree by Joe Clifford at Near To The Knuckle
Harsh, nasty.
http://www.close2thebone.co.uk/wp/?p=558

A First Time For Everything by Bill Baber at Shotgun Honey
Cruel, gritty.
http://www.shotgunhoney.net/2012/07/a-first-time-for-everything-by-bill-baber.html

Bio: Spinetingler Award nominee Paul D. Brazill has had bits and bobs of short fiction published in various magazines and anthologies, including The Mammoth Books Of Best British Crime 8 and 10,and he has edited the anthologies True Brit Grit & Off The Record 2– with Luca Veste - and Drunk On The Moon 1 and 2. His ebooks Red Esperanto, Death On A Hot Afternoon, 13 Shots Of Noir, Vin Of Venus (with David Cranmer & Garnett Elliot ) and Snapshots are out now, and his novellas The Gumshoe and Guns Of Brixton will be out pretty damned  soon. His blog is here.
Posted by Chris Rhatigan at 4:13 AM 8 comments:

Here are my top stories from 2012. Five from the internet (just by chance...) and two more that appeared in publications I edited.

In the coming weeks, writers and editors will be picking their favorites, too, so be sure to check those out.

"The Day We Shot Jesus on Main Street," by Travis Richardson at Shotgun Honey. For some reason, surreal stories involving the Jesus Christ were big with me this year. This story's got a healthy dose of Southern insanity that shoves down your eating pipe.

"Baby Jebus' Big Score," by Heath Lowrance at Pulp Metal Magazine. Baby Jebus as a gangster. I don't think I need to say anything else.

"Blackbird," by Dakota Taylor at Slit Your Wrists Magazine. This guy's only 19 and he's already writing poignant fiction. This story's basically how I remember...except add more meth.

"A Best Friend is the Hardest Thing to Come by," by Ryan Sayles. This guy's quickly becoming one of my favorite writers and this here is what he does best--funny and nasty as hell.

"Waiting Her Chance," by Patti Abbott. I could make a list of just stories she's published this year. But I didn't do that. Anyway, this one is pure Patti--quiet menace, like a snake in a dark cave or some shit like that.

And here's two I published....

"7 Seconds," by Erin Cole at All Due Respect. Maybe the most suspenseful story I've read since Bradbury's "The Whole Town's Sleeping."

"Kingdom Come," by Kevin Brown in Pulp Ink 2. Another surreal story involving old-time religion... Don't know why that was striking a chord with me this year, but I assure you that this crazy-ass vision of the apocalypse and it's no-good atheist narrator will win you over.
Posted by Chris Rhatigan at 5:57 AM 6 comments:

The Best Bizzaro Fiction of the Decade 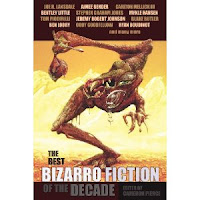 The problem with an anthology like this is the name. Anything that claims to be the best of an entire decade sets up ridiculous expectations about how good it will be. It also creates problems for the editor--do you try to represent all sides of the genre? If so, will your anthology have any coherency, or will it seem like a grab bag?

My favorite in this ilk is Ben Loory's "The Octopus." The Octopus, who is living an average middle class man's life, is visited by his nephews from the sea and awkwardly interacts with them, eventually leading him to question his decision to move away from home. It's a simple story told in simple language--and its gorgeous in a Ray Bradbury kind of way.

Blake Butler's "We Witnessed the Advent of a New Apocalypse During an Episode of Friends" is as funny as it is strange. It's perfectly executed, with a standard, boring episode of this soul-sucking show becoming more and more disturbing, until it descends into complete chaos. Really, when you think about it, when else could the apocalypse take place other than during an episode of Friends? I first read this story in Bust Down the Door and Eat All the Chickens, and found it even more satisfying on a second read.

Garrett Cook's "Mr. Plush, Detective" is a hardboiled PI story featuring a man trapped in the body of a teddy bear. He's not the white knight type, but a lowdown, no-good, stab-you-in-the-back-and-take-your-stash PI. It's good, dirty fun and has inspired me to pick up the novel, Jimmy Plush, Teddy Bear Detective.

Anyway, The Best Bizarro Fiction of the Decade is a fantastic compendium that anyone who enjoys this genre should check out.

Posted by Chris Rhatigan at 11:31 PM No comments:

At Slit Your Wrists and Drunk on the Moon 2

Slit Your Wrists Magazine is a cool hangout and has featured some very fine fiction. I'm happy to have my story up there, thanks to editor Laramore Black. It's called "Harlot X and the Chestray" and it's straight bizarro, which is the direction my writing has veered toward as of late.

Drunk on the Moon 2, from Pulp Metal Fiction, is also out now, with this slick cover. For those uninitiated, these are stories about Roman Dalton, Paul D. Brazill's werewolf/detective/drunk creation. This edition has entries from the likes of Richard Godwin, Ben Lelievre, and Chad Eagleton.

My story, "The Birds Are Dead," also found its way in there.
Posted by Chris Rhatigan at 10:30 PM No comments:

At All Due Respect... and Yellow Mama

Eric Beetner's got this issue of All Due Respect with "A Job for Two," proving that even small-time robberies can go terribly, terribly wrong. Another fine effort from a top crime writer.

And I have a story in the xmas issue of Yellow Mama, "Small Bites." While you're there, be sure to check out work by AJ Hayes, Richard Godwin, Christopher Grant, and Cindy Rosmus.
Posted by Chris Rhatigan at 8:32 AM No comments:

Love Me by Danger Slater

Do you like tales of Cold War espionage? Taut psychological thrillers? Science fiction as a metaphor for U.S. foreign policy? How about cute angst-filled teenage vampire toyboys?Well, too bad. None of those things are in this book.

So reads the description for Danger Slater's debut novel, Love Me, which sets the tone perfectly. Instead of all that crap, Love Me is an epic, inter-dimensional quest for contentment through the eyes of one viking who (some of the time...) lives in a castle constructed from skulls.

It's absurd and hilarious. While the book brings up big issues--what is the purpose of life? how does one find happiness? what is identity?--thankfully, it never takes any of those questions particularly seriously, because where the fuck would that get us. Mostly Danger Slater is concerned with entertaining and baffling readers as his viking romps through a surreal world. Highly recommended.
Posted by Chris Rhatigan at 8:33 PM No comments:

I'm thrilled to be part of Nightfalls, an anthology from editor Katherine Tomlinson, who edited the dearly departed Dark Valentine Magazine. This one is all about the apocalypse, a great concept for a collection. So many of my favorite authors in here too--Nigel Bird, AJ Hayes, Jimmy Callaway, Patti Abbott. Snatch it up on Amazon straight away.

On another note, Matt Funk has a knockout story at All Due Respect, "His Girl." With so many hold up stories out there, you might wonder how this could be original, but trust me that it is. Funk is always great, but this one of my favorites of his. The struggle for power between these players and an unexpected yet believable twist make for great storytelling.
Posted by Chris Rhatigan at 2:47 AM No comments: