The Driver's Guide to Hitting Pedestrians

Andersen Prunty's The Driver's Guide to Hitting Pedestrians has to be one of the finest single-author collections of bizarro out there.

The cover and Prunty's hilarious description sold me on the book right away. Then I read it and that was good too. I make smart decisions.

Anwyay, the title story is a wonderful bit of macabre about a contest to see who can injure the most pedestrians. The contest comes complete with an oddball set of rules and a desperate, deranged cast of characters. This story is probably the closest to a standard narrative in the whole book, but it's still wild, weird, and fatalistic.

"The Laughing Crusade" might be my favorite. After finishing his treatise on the New Anarchist Revolution, a man retreats to his back porch for a beer and a cigarette. He soon stumbles upon the fact that the entire neighborhood is filled with people maniacally laughing and that they're going to crush all the non-laughers. The ending is truly disturbing--images I won't soon forget.

"Princess Electricity" is a surreal journey into a world where one buys loaves of bread with 10 ideas or gets a job by having the name Terry. And some random girl controls all of the electricity.

Every story in here is the real deal--unpredictable, imaginative, often funny. I like the variety in this collection--some of the stories lean toward horror, others toward fantasy, others are straight bizarro. Prunty's an author I can't get enough of.
Posted by Chris Rhatigan at 4:00 AM No comments: 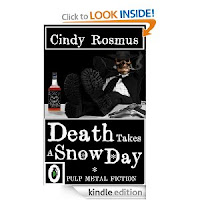 I like writers who know their strengths and play to them. Cindy Rosmus is one of those writers.

Her short story collection, Death Takes a Snow Day, is all about that wonderfully fucked up state, New Jersey. Jersey hit men, Jersey bars, Jersey relationships. The setting becomes a full-fledged character, present on every page.

Rosmus maintains a focus on dysfunctional relationships between men and women throughout. Sometimes a wife is hiring out the murder of her husband. Sometimes a woman is in love with a man she knows is evil. Every scenario is doomed from the start. If noir characters fall from the curb to the gutter, then Rosmus is a noir writer.

Yet, unlike many noir writers, Rosmus crafts sympathetic narrators--people who are trying to do their best. But in Jersey, your best isn't enough.

Death Takes a Snow Day is genuine fiction you need to read.
Posted by Chris Rhatigan at 11:38 AM 1 comment:

At All Due Respect -- Richard Godwin

Godwin has one of the most distinctive voice in crime writing, so you'll want to check this one out.
Posted by Chris Rhatigan at 8:22 AM No comments:

All Due Respect Anthology Submissions Open 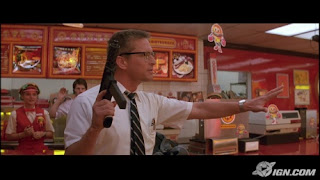 I'm reopening All Due Respect submissions for the zine and for an upcoming anthology.

I'm looking for the same thing for both the zine and the anthology: gritty, no-nonsense crime fiction, 1000-5000 words.

The collection will be released in early 2013 by Full Dark City Press. They're open for longform submissions as well, so check that out too.

Send your stories to allduerespectcrimeblog@yahoo.com. Please let me know if it's a simultaneous submission. I'll consider any story submitted for both the zine and the collection.

Submit, or a middle-aged white guy from LA who's mad about not being able to get breakfast at a fast food restaurant will hunt you down.

They Had Goat Heads by D. Harlan Wilson

"I go to a movie and notice that I'm starring in it. I don't remember shooting the movie, let alone auditioning for the part. I am not an actor." -- D. Harlan Wilson, from "The Movie That Wasn't There"

They Had Goat Heads is a masterpiece of the surreal. It's the kind of short fiction collection that hangs together perfectly. Each story is brilliant on its own, but together they resonate beautifully. Wilson blends micro, flash, and short stories to great effect.

The result is chaos--a world where you no idea which way is up or down. You expect to be assaulted by elbows, giraffes, and monster trucks. At the same time. Or at separate times.

Summarizing the plots of these stories is pointless. It's safe to say that you'll go for a strangely pleasing ride in each.

Instead, I'll drop in some random lines:


"Timeless lint blizzards should be wrangled and punished with the same efficiency and enthusiasm as cautious men. The fact is...

...Lithuanian tourists cannot be trusted." -- from "The Kerosene Lantern Tour"


"When he finished telling the story, he left my office.

He came back, told me the same story, and left again.

He cam back again and told the story over, pausing to emphasize the importance of attention-grabbing introductions.

He came back a forth time and told the story over, twice, back to back." -- from "The Storyteller"

Posted by Chris Rhatigan at 5:59 AM No comments:

Octopope! is a great example of a book that sets rules and sticks to them.

It is a also a great example of a book about octopi selecting a new pope.

John Smallberries tells us none of the "why" and sticks to the confines of this beautifully simple and nutty premise.

This is a short, fast, and hilarious read.

As soon as I saw the name, I said "Hell yes!" I said the same thing after reading it.

Posted by Chris Rhatigan at 9:35 AM 4 comments:

At All Due Respect: Benoit Lelievre

Benoit Lelievre is up at All Due Respect with a tough boxing tale straight from the streets of Oakland, California. Check out "Droppin' Plates."
Posted by Chris Rhatigan at 10:04 PM 2 comments: