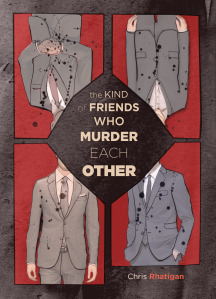 Three dudes who used to work at the same convenience store are out bowling one night when they confess crimes to each other for literally no reason. They all succumb to fits of intense paranoia and proceed to live out the book's title.

The Kind of Friends Who Murder Each Other is a weird noir exploration into clock-watching, friendship, smoking, minimum-wage jobs, nihilism, bad coffee, generic America, and boss-hating. At the end of this book, you will have learned zero life lessons and will probably feel like shit.

Here are some smart people saying some nice things about the book.

"The Kind Of Friends Who Murder Each Other is filled with losers, from the narrator Simon to his pals Mackey and Slade, all the way down to the bartender who no doubt enjoys Springsteen's 'Born To Run,' so much so that it plays four times before the first page is gone. The thing about these losers, though? We know each and every one of them. Some of us may even be them, in one form or fashion. And that's what makes the book hit like a sledgehammer between the eyes. Read it and weep, kids." -- Christopher Grant, Editor/Publisher of A Twist Of Noir

"It was one of those nights that Raymond Chandler talked about in the opening paragraph of Red Wind. You know those nights, the ones that make you realize you've done the same things on the same night with the same guys for what seems an eternity. The ones where even the air is thick and still and motionless. Where everything moves slow and turgid and without purpose. And you get the feeling that none of the here you inhabit is real. You get the feeling that you and those guys are like bugs in amber. That a thousand years from now you and those guys will be sitting there, at the same time, on that same night, stuck. That kind of night.

Yeah, Friends Who Murder Each Other is like that. Just like that. And it's one helluva ride." -- AJ Hayes, short story writer