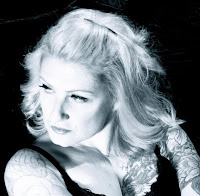 Julia Madeleine is a force in the crime fiction world and writes some of the best short stories around, including a disturbing tale in Pulp Ink 2. She's here with us today talking madness, writing, research, and tattoos.


DBK: Many of your short stories are about crazy people. The characters may seem semi-normal at first, but by the end, it's obvious that they're batshit. What draws you to writing about the less-than-sane?

JM: I swear I could be in a room of fifty people and I’ll attract the one wack-job who’s there. But maybe that’s because I love crazy people. They’re so fascinating. I know quite a few of them, got a few in the family. They are an endless source of material for my writing. One of my crazy friends recognized herself in my novel—a brief reference to her showing up to lunch with her mother with a shaved head, wearing a tiara and a feather boa—and laughed out loud. I always feel a little guilty writing people into my stories but they seem to enjoy it when I do.


DBK: How much research do you do for your stories? How about novels?
JM: As much as necessary. I spent hours on research for my novel The Truth About Scarlet Rose, combing through newspaper archives on microfiche down at the Toronto reference library (it takes place in the 80s). But the research was fun. Short stories don’t seem to require too much in the way of research.


DBK: Your work alternates between crime and horror. Do you see yourself as a crime writer, a horror writer, a pulp writer, or just a writer?
JM: Oh, probably a crime writer with a love of noir.


DBK: Whose work are you into right now?
JM: I just finished Don Winslow’s Savages and went to the movie (both are brilliant) and picked up Kings Of Cool. Love his style. I recently read Gillian Flynn’s Gone Girl. I’ve read all of her books and love the way she writes. I’m currently simultaneously reading Meagan Abbott’s Dare Me, and One Good Hustle by Canadian author Billie Livingston.


DBK: Your "Tattoo and a Review" series is fabulous. How do you coax people into reading pulp who might not otherwise be interested?
JM: I pretty much trick them. I offer them the use of my lovely iPad and the invitation to distract themselves from the pain of their tattoo by indulging their mind in some dark little tales of crime and mayhem. What I’m really doing is subcontracting reviewers so I can feature some of my writer friend’s work on my blog. It’s a lot of fun for everyone I think.


DBK: How much does your work as a tattoo artist influence your writing?
JM: I don’t know if my tattooing influences my writing so much as competes with it for my time and creative energy. It’s always been that way with me between the two mediums; art and writing. Everything in my life suffers for my writing. It always will and I’m good with that.


Author's Bio: Julia Madeleine is a thriller writer and tattoo artist living in the Toronto area. For a year she lived in the country on a 30-acre property in the middle of nowhere which became the inspiration for her novel, No One To Hear You Scream. Find out more about her writing at www.juliamadeleine.com
Posted by Chris Rhatigan at 8:23 AM 3 comments:

Beat to a Pulp: Round Two

Beat to a Pulp: Round One might be one of the best crime fiction anthologies I've ever read--and Round Two follows in its footsteps.

The variety and quality of stories is remarkable. So is how emotionally effecting these stories are--this is an excellent demonstration of how pulp fiction isn't just about sex and violence. (Though there's plenty of that too!)

It kicks off with Bill Prozini's "The Space Killers." I usually dislike pastiches, but this is very well done. The punchline is a doozy--and it's revealed in a gradual, controlled manner.

The legendary Vin Packer's "Far From Home" might be my favorite in here. It's a sad, lovely story about family loyalty and discrimination. And the writing will make you be afraid to pick up a pen again.

I dig Chris F. Holm's crime fiction, but his short horror is so freaking good. "An Open Door" is sure to give you the creepy crawlies, but it goes beyond that and delves into our lack of understanding of how the world works. I think horror's best when it's exploring our base insecurities, and Holm does that here.

Alec Cizak's "State Road 53" shows just how messed up small-town life can be. He's knows how to create flawed, likeable characters. And the atmosphere is perfect--felt like I was back in the Midwest.

I don't exaggerate when I say that there are several other stories in here that will floor you. Jodi MacArthur, Patti Abbott, Sean Chercover--the list goes on. There's only one solution--and you can find it here.
Posted by Chris Rhatigan at 8:45 PM 4 comments:

Excited to have Jim Wilsky here today, whose story at All Due Respect is kinda legendary. He also has a novel coming out TODAY from Snubnose Press. It's called Blood on Blood and is co-written with Frank Zafiro. You can find out more at their blog, Harboiled Partners in Crime.


First and foremost, I want to thank Chris for letting me do a guest post on Death by Killing. I consider it an honor to be here. I was going to try and write something clever and witty or maybe write a barely disguised attempt to push my new book - but then the other day, I read one of the saddest quotes I think I’ve ever come across. So here is something else, a tribute maybe or,

A Toast
We all have our favorite authors and I’m betting that some of them don’t necessarily write in the same crime fiction genre that a lot us do. My own personal favorite really has nothing to do with what I try to write, or the sandbox I play in. But he loves writing and books, books of all kinds.

My guy is Larry Jeff McMurtry. Born 1936, in Archer City Texas. Son of a rancher and his wife. That’s about all you need me to say because it isn’t like I’m talking about a guy that you don’t know much about. Anybody who can write, with such excellence, in such a range from Lonesome Dove to Terms of Endearment doesn’t need much of an introduction. Just a little side trivia: his novel Horsemen, Ride By inspired a little movie called Hud starring some goof named Paul Newman. His hometown of Archer City was the model setting for his novel and resulting movie, The Last Picture Show. Anyway, there you go. He had game.
He said this back in 2005, "The world we created that book shop for is gone. It doesn't exist anymore. I will soon enter my seventieth year and would like to travel a bit before I become too decrepit. The books will stay right where they are -- they can slumber in their majesty until the next turn of the wheel." And if you have any emotion in you, any at all, you have to love those beautiful sad words.

The books he was speaking of then were housed in his four Booked Up bookstores and buildings. He had a dream of opening up used book stores in several cities around the U.S. including Arizona, Chicago and D.C. as well as his home base of Archer City. He did exactly that, fulfilling his dream in the late 80’s and 90’s. Hundreds of thousands of books were stacked on unending shelves. He wanted the book to survive, the bookstore in general, to survive. And not the chain stores that have racks and racks of the latest bestsellers in maybe 8 or 10 sections, but a real honest to God bookstore with the most unbelievable collection you could ever imagine.

By the time he made the statement above they were all closed except Archer City and it was going away too.

Did he originally do it for money? Of course not. Did he decide to open it in his hometown because of the demographics and predicted explosion of growth of the Archer City population….at under 2,000 people and a stop off on the way to nowhere, probably not huh? No, he did it because he loved books.

Then, later in 2005, he reconsidered and decided to stay open. The decision to keep things going was driven purely by the heart and by an outpouring of public support. In what used to be 4 buildings, all Booked Up in tiny Archer City is now boiling down to one and they are having a public auction (August 10th and 11th in fact). McMurtry has an unbelievable book collection spanning across vast sections of art, children's literature, collecting and crafts, fiction, military history, poetry, science fiction, 18th and 19th century books, classical studies, fiction before 1925, foreign books and pamphlets, ancient history and mythology. Some 450,000 books that will go down to around 150K.

McMurtry isn’t just a great author and my personal favorite because of his tremendous string of award winning novels and movies adapted from those novels, or his numerous screenplays. Not just for his Guggenheim grants, Stanford fellowships, Pulitzer Prize and Academy Awards. In my mind, it’s also because he loves the written word. Loves the pure art that represents. Larry McMurtry is a romantic at heart. His books are like videos to me and they have come with a built in soundtrack that I can hear. Yes, he’s a romantic and I would argue that all great writers share that trait, among others.

If you are close enough and if you have the means I would encourage the trip to Archer City. If not now, make that trip someday. It will be worth it.

Just remember, “The books will stay right where they are -- they can slumber in their majesty until the next turn of the wheel."

I hope I can write a sentence like that someday.
Posted by Chris Rhatigan at 9:15 AM 3 comments:

Fiona Johnson's got a dead dog, a couple of dumb criminals, a tough-as-nails old woman, and a healthy serving of Scottish slang over at All Due Respect. You don't want to miss "Never Too Old for Fun."
Posted by Chris Rhatigan at 5:09 AM No comments: