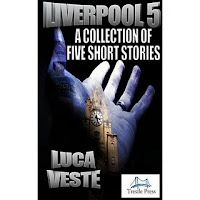 Luca Veste's a new name around the crime fiction community and he has an entertaining collection of very short stories out now with Liverpool 5.

As you might guess from the title, his work is firmly rooted in Britain. One thing I've noticed about the British writers is that they're generally funnier than us Americans, and I dig Veste's sense of humor. My favorite piece in here is "Heavy Sleeper," a darkly funny tale about a guy who will sleep through just about everything. I can relate! "Peeling Spuds" is another strong entry about a woman who's tired of responding to her husband's demands.

Veste has a strong voice, what I'd call a storyteller's voice. Rather than working in scene -- in the moment -- his characters tend to be reflecting on what's happened to them. It feels like you've just sat down with these characters to have a conversation. Everything feels very natural.

Check out this new title from Trestle Press at Amazon US (99 cents) and UK (86 pence).
Posted by Chris Rhatigan at 7:03 PM