Today's top five is from that stylish gal, Absolutely Kate, and she has five picks from the dynamic force that is her blog, At the Bijou.
A*K:  I raise my right hand and do solemnly swear I supremely dig all the authors so juicily aforementioned here, and natch the joie de vivre of workin' with Rat-a-tat Rhatigan (and dubbing him that) in what turned out to be AT THE BIJOU's Noirathon this past year, (still going strong!) But I'm going to go back a bit in the time that was last year. Back to when authors took authors all the higher by bringing their good words'work and great vibes into some quantum kinda sync. It all started with the thrill of PAUL BRAZILL pointing out the kingpin of detective tales ROBERT J RANDISI doing a Barnes & Be'Nobled interview on, of all things ~ what Paul & I dig - the Rat Pack. Nuttin' but nuttin' held me back from goin' knock, knock, knockin' on that Mighty Man's door in the wee small hours of the mornin' (I found we both were up writing 'round 2:00, mebbe 3:00 am). RJR let me call him 'Pally' and the rest is dear history into the futures we'll all be kickin' up ... that said, some of these mighty fine authors joined me in the ~

REVUE
AT THE BIJOU
My Five? No jive ~
From THE*RAT*PACK*REVUE, AT THE BIJOU:
JULIE MORRIGAN'S "STAR" ~
This was Jools' debut in an ensemble cast, and shine she did with Dean and Sammy at the bar relating this cool cat character McGraw, an Irish dick that worked downtown. Dean sipped his martini. Sammy went on swell on what McGraw did tell ~ 'bout this sweet broad Celeste. She used to sing at Santini's. Dean remembered her as a cute kid . . . but OH! The story that linked those two for perpetuity past circumstance . . . (Read it. Feel it. I'm so gosh'darn happy to say, that tale's given birth to a novel in the works . . . for Morrigan magic means multitudes.)
KEVIN MICHAELS' "WHO'S GOT THE ACTION" ~
"No matter how often Sinatra performed there, every two show-a-night performance was special.  Little details made a difference.  How the glasses were arranged.  The way each napkin was folded.  Which guest at the table got the check.  Skinny made sure he paid attention to the inconsequential tasks nobody else bothered with. " Yeah. Skinny D'Amato's joint. Back and forth to what's goin' down at the swanky Hotel Traymore. Atlantic City. Tough place. Tough characters. Tough tendency for Jersey Shore tough guy Kevin Michaels to tell a tale of crime behind the scenes of the main act. Make sure you order a double when you gulp this one down folks. This one's rich. There's a $10,000 hit on the line.
ROBERT J RANDISI'S "HOW DID ALL THESE PEOPLE GET INTO MY ROOM?" ~
Yeah. RJR was our headliner. He said he'd shoot a series of short posts, sorta work the Lounge before hitting the Main Room. Man oh man can that man work a Lounge!  Learn who HIS favorite RatPacker turned out to be and step into his show-patter. It resonates I tell ya, and you just want to go readin' on more and more. Good thing -- the guy's penned out about 454, mebbe 500 books. Dig'em. But dig him. Gettin' juiced up with the adrenaline of other authors. And baby -- ain't that what it's all about? 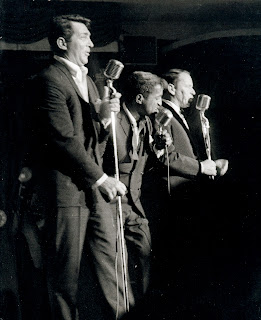 ERIC BEETNER'S "DON'S DILEMMA" ~
What a hit a hit man makes . . . Is he lackey or lucky? You be the judge, 'cause "Who doesn’t want to sit at the cool kids' table?" Think Don Rickles as a wanna-be. Think dancin' girls all gone home and what kinda "favors" get asked to be shoveled ~  "Somewhere in there it turned sour and this Jewish kid from New York ended up in a pickle."  Only hardened crimewriter Eric Beetner can really show ya how a spade is called a spade . . . but in a Vegas desert? Dig it. But -- uh ... keep a safe distance, will ya?
And would we forget . . .
PAUL D BRAZILL'S "EVERYBODY LOVES SOMEBODY SOMETIME" ~
Why do you read the thrill o'Brazill? Because like I do ~ you have NO CLUE what's gonna come on in atcha? Yep. Sure thing it'll take your mind for a trip you never packed a slick valise for. Metaphor past fast pace, this tawdry gem shines your mind up right spiffy. Hotels, casinos, the Greek Islands . . . and new ways to play "come blow your horn". But THEN what happened to an act that broke up? Don't let pieces of the ceiling hit ya on the head when you read this one folks. It's Brazill on a spree . . . always the gritty guy, with the wink in his eye that appeals so to me. Na zdrowie, dear one.
~ Absolutely*Kate, so proud past proud to know authors takin' authors all the higher in their soar . . .
PSSST ~ Anthony Venutolo's "DIVORCE YOUR LOVED ONE WITH DIGNITY" ... and Sean Patrick Reardon's  "BUNG HO!" sure rocked our RAT*PACK*REVUE too, and brought the house down with Matt Hilton's "YOU KNOW WHAT I LIKE".  (Hey, those guys know people who know people ~ I'd be more scareder than a dark alley with sharp objects and menacing noises to leave THEM out).
Posted by Chris Rhatigan at 9:36 AM