Free Book: Abide With Me by Ian Ayris 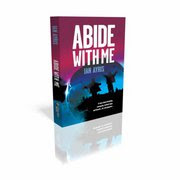 To anybody in the crime fiction world, it's no surprise that Ian Ayris is moving up to bigger and better things. His short fiction was all over the internet in 2010 -- raw, powerful stories told in a voice that you will never mistake for anyone else.

So I was pleased to see that his debut novel, Abide With Me, plays to all of Ayris' many strengths. The story is told from the perspective of John, a kid from London's East End. John is one of the most likable characters you'll ever meet -- thoughtful, funny, and very loyal to his friends and family, even through a lot of painful times. The thread that runs through the whole novel is John's friendship with Kenny, a kid who was just dealt a shit hand in life. At its core, Abide With Me is about people's fucked up relationships and how they try to deal with them.

And it crackles with energy. As Eric Beetner put it, Ayris' voice transports you -- and it is one amazing journey. He takes the time to develop even minor characters and each scene is crafted perfectly. I read the second half in one sitting -- something I almost never do -- it was that enthralling. Part family drama, part coming-of-age tale, part crime story, this is one of the most memorable books I've read in a long time.

And now I have the pleasure of giving one of you lucky shits a copy of this fine book. (The rest of you will have to wait until it's released in the spring.)

So here's how the contest works: name your favorite Ian Ayris short story in the comments section. I'll put all your names in a hat (or whatever) and pick the winner.
Posted by Chris Rhatigan at 6:18 AM