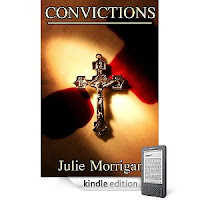 Julie Morrigan's debut novel Convictions is a fantastic read that turns the traditional police procedural form on its head.

You see, I'm not much for police procedurals. I've watched enough Law & Order in my day -- or any one of its million ripoffs on American TV. When it comes to reading, I tend to stray away from them.

But Convictions sets itself part. The book starts with two sisters who sneak out to see a boy band concert. They're kidnapped when the older sister, Tina, accepts a gift from a stranger. She manages to get away, but her little sister, Annie, isn't as lucky.

The first half of the book focuses on the results of this devastating incident on the family, how the stress of it pulls them apart. The mother blames Tina for everything and refuses to forgive her, which weighs on Tina throughout the novel. The second half is more about the investigation of the case, but Tina's progress is still a main part of the story.

Interestingly, I don't think there's a traditional main character in this book. It's more of an ensemble cast with this single incident playing the part of the protagonist. It's almost as if Julie took this event and explored every possible angle of it. This makes for a nuanced and layered narrative.

Convictions is compelling, page-turning stuff, but with a strong emotional core and a dynamic cast of characters.
Posted by Chris Rhatigan at 3:21 PM